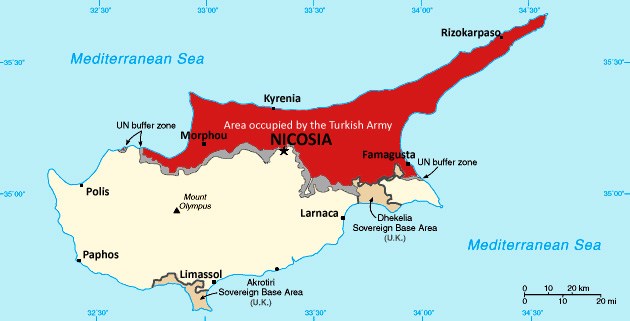 In July 1974, Turkey invaded Cyprus, divided the island by force, and ethnically “cleansed” the massive area taken and occupied by the Turkish army. [See also “The Second Turkish Offensive in Cyprus, 14 August 1974”.] More than four decades later, the island is still divided. That is because none of the major powers have put any real pressure on Turkey, despite many UN resolutions calling for the withdrawal of Turkish forces.

On the contrary, pressure has been exerted on the Republic of Cyprus to make concession upon concession in the hope that a package acceptable to Turkey would eventually be arrived at.

Thus, in 2004, we ended up with the Annan Plan, into which Annan incorporated, even at the last minute, further concessions to Turkey, requested by Turkey but not endorsed by the Greek negotiators. The Cypriots, when asked to vote on the Plan in a referendum responded with a defiant “no”, seeing it as little more than a way of legitimising and perpetuating the division of the island—and letting Turkey off the hook.

At the heart of the matter is a straightforward question: Should the results of illegal invasion, partition by force, and ethnic cleansing be accepted and allowed to stand? And the sad truth is that to date they have been...

The consequences of the invasion: 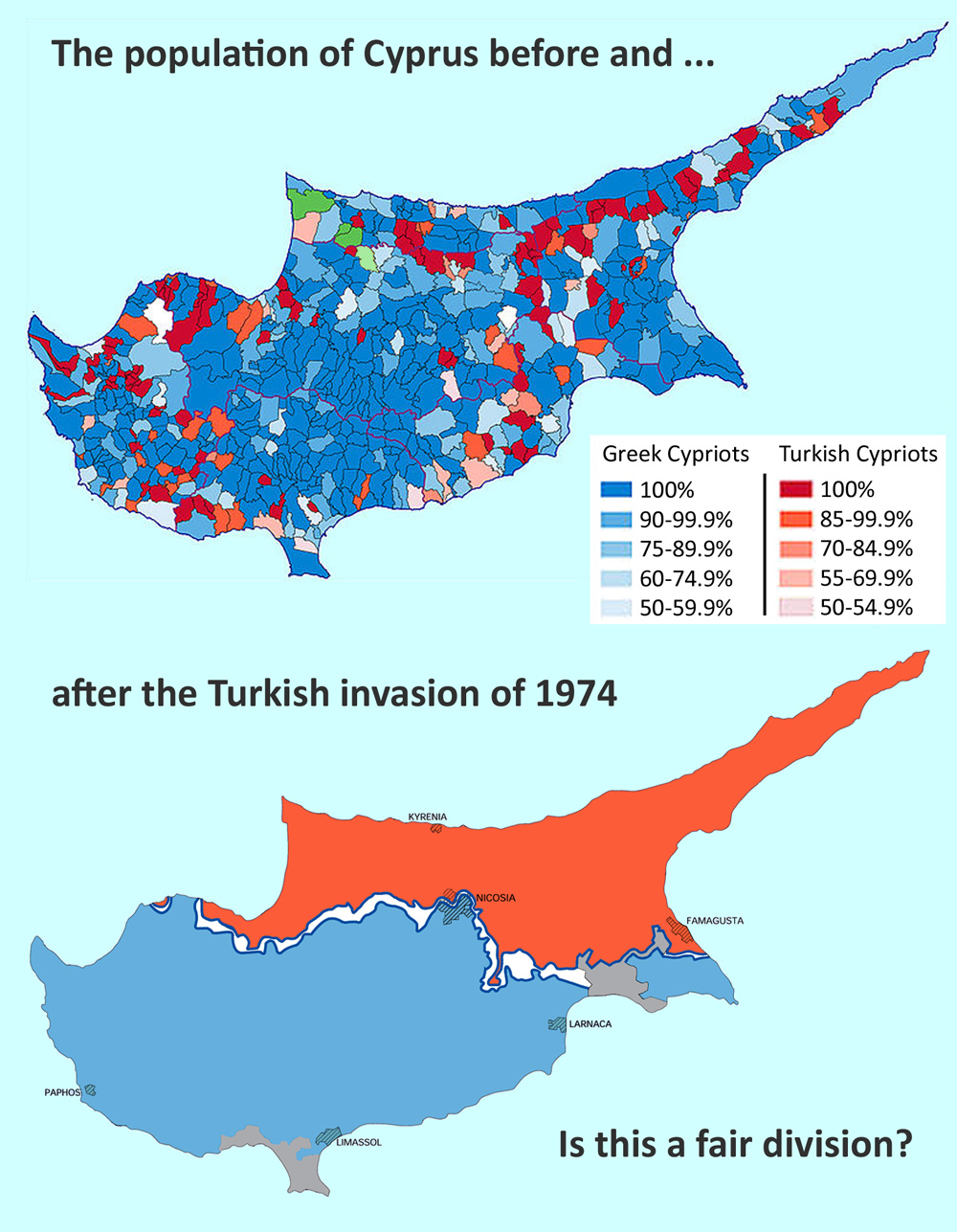 A series of UN General Assembly and Security Council resolutions, as well as resolutions adopted by numerous other international organizations (including the EU, the Commonwealth and the Non-Aligned Movement), reflect the universal condemnation of Turkey’s invasion and all subsequent acts of aggression against Cyprus; demand the return of the refugees to their homes in safety and the tracing of the missing persons; and call for respect for the human rights of all Cypriots as well as for the independence, sovereignty and territorial integrity of Cyprus. Moreover, the European Court of Human Rights has found the government of Turkey responsible for gross and systematc violations of human rights in Cyprus.

Successive rounds of UN-sponsored talks between the Greek and Turkish Cypriot communities to resolve the Cyprus problem have been undermined by the Turkish side which has sought a settlement that in effect would leave Cyprus permanently divided and hostage to foreign interests. The government of Cyprus and the Greek Cypriot side, on the other hand, have been insisting on a genuine reunification of the island, its institutions and its people. Intensive efforts by the UN resulted in the presentation in 2004 of a plan by the Secretary-General for a comprehensive settlement of the Cyprus problem (Annan Plan V). On 24 April 2004 the people of Cyprus were asked to approve or reject the plan through separate, simultaneous referenda by the two communities. A clear majority of 75.8% Greek Cypriots rejected the proposed Annan Plan because they felt that the final text was not balanced and did not meet their main concerns regarding security, functionality and viability of the solution.

In rejecting the Annan Plan, the Greek Cypriots did not reject the reunification of Cyprus, which remains their primary goal. They rejected that particular Plan because, despite claims to the contrary, it did not lead to a real unification of the island and the reintegration of its people, institutions and economy.

Throughout the lengthy intercommunal talks which have taken place over the years, held under the auspices of the United Nations Organization, the Greek Cypriot side has always shown goodwill and a genuine desire to settle the Cyprus problem in a way that will best serve the interests of all the citizens of Cyprus.

For the solution to be viable and to withstand the test of time, it must be perceived as fair by the people who will have to live with it. The solution, therefore, must be democratic, just, workable, financially viable and compatible with EU principles, laws and democratic norms, the Convention on Human Rights and key UN resolutions; Cyprus must remain a unified state and enjoy full sovereignty, territorial integrity and independence.

Loss of Resources as a Result of Turkey´s Invasion

“We demand that the solution will restore and safeguard the human rights and fundamental freedoms of all the people of Cyprus, Greek Cypriots, Turkish Cypriots, Maronites, Armenians and Latins, including the right of return and the right to property for the refugees. We demand that the solution will provide for the withdrawal of the Turkish occupation troops and the demilitarization of the Republic of Cyprus. The ultimate goal remains the demilitarization of all of Cyprus....”

“The Cyprus problem remains unresolved despite the many efforts that have been made from time to time. The problem has not been solved due to Turkey’s refusal to accept a solution that would be to the benefit of the people of Cyprus. I firmly believe that the time has come for the problem to be solved in a just, viable and functional way and for the principles of international law to be restored; principles that Turkey violates through the invasion it carried out in 1974 and through the occupation of a large part of our homeland....”